The Mastechef SA Cookbook launch took place at Exclusive Books, Sandton last night and a few of the contestants were in attendance including Thys Hattingh and his pregnant wife! 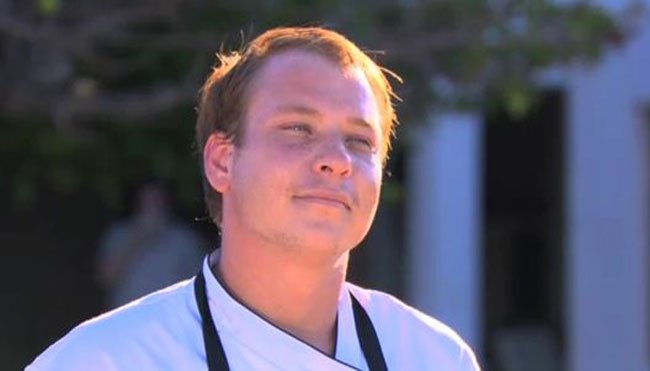 Thys went out of the competition in episode thirteen in Zanzibar, no happy memories for him on that island!

It was just one of those odd things where for some reason you get the wrong impression about someone with MasterChef SA contestant Thys Hattingh being the case in point. Watching the show one could be excused for getting the wrong impression about the man from Rustenburg, there is a certain femininity about him and his ‘passion for pastries’ seemed to cement that image in my mind.

Meeting him and his pregnant (for the third time) wife, Andrea for the first time left me a little confused at first but when I revealed to Thys my errant opinion I was relieved to hear that I was not the first person to come to the wrong conclusion.

This was not the only thing I’d got wrong about Thys, television made him look very short and yet in real  life he’s over 6ft tall.

So there I was thinking that he was short and bent, could I have been more wrong?

A few of the MasterChef big hitters were there, Manisha Naidu, Sarel Loots and Khaya Silingile with baby “Zion” the power behind the juicer in Zanzibar along with early departures Berdina Schurink, Lwazi “quail is un-African” Mngoma and Brandon Law.

Brandon made a huge impression with the audience after he revealed how he wanted to win MasterChef SA more than Tom wanted to catch Jerry and the most emotional moment in his life being when Manchester won the European Cup.

He finally got his revenge on me after we had had a full go at him for those comments by signing my MasterChef SA cookbook taking a swipe at my favourite football team, which for the record Brandon won the European Cup twice back to back long before United had any idea what it looked like.

Brandon’s mother also revealed that on the night that Brandon went out of the competition with a dismal Chicken Pie she had coincidently served up Chicken Pie for dinner. When the world conspires against you it sometimes takes things too far!

The cookbook has some great photographs from the series and recipes from all of the best winning dishes including Khaya’s Chicken Ballotine, Samantha’s Dutch Croquettes and Deena Naidoo’s Chocolate Fondant with Amarula Cream.

Some of the recipes have been modified from the original to make them more suitable for home cooking.

Order your copy here! R199.00 (at time of publication of this article)

Roy Webb a retired design engineer in the UK with time on his hands and a spot of creativity develop[...]

One pot cooking at its best with this Hake Recipe with New Potatoes, Peas and Mint by Stefan Marais [...]

This Harissa Spiced Lamb Burger Recipe is a great way to add a new flavour dimension to your burgers[...]

There is little to beat a nourishing stew on a cold winters evening and this Beef Stew Recipe in Gui[...]

How to say "beer" in Europe

While we're confident that in most European countries barmen will understand the word beer, it is a [...]

A Black Lemon Roast Chicken Recipe, named black because of the colour the lemon turns in the cooking[...]

How to cook crispy smashed potatoes

Curtis Stone shows you how to cook up these delicious smashed potatoes, the perfect side to any numb[...]