This Gordon Ramsay Beef Wellington Recipe is a timeless classic and the fiery Scot adds his own irresistible touch.

It is not entirely clear as to where the name “Beef Wellington” originates. The natural leaning would be to Arthur Wellesley, the 1st Duke of Wellington, the man who famously spanked Napoleon’s bottom on the battlefield at Waterloo in Belgium, not on the site of the train station in London. His name has also been given to “Wellington boots” which were actually worn by the man.

Another theory reverts back to the Wellington boots in that the finished product looks a bit like a Wellington boot, if you think that’s ridiculous you’d be right.

A final theory put forward by Clarissa Dickson Wright (one of two fat ladies) is that the dish “has nothing to do with that splendid hero, the Duke of Wellington, it was invented for a civic reception in Wellington, New Zealand, but is a splendid addition to any party.”

Regardless of it’s origin it is a great dish, in fact it’s so good that it has made it on to the menu at the Gordon Ramsay Steakhouse at Paris Las Vegas.

The 275 seat restaurant does about 400 covers a night and his Beef Wellington is one of the more popular dishes on the menu but why pay $52 for one when you can make it at home?

For the best results use a good quality steak, Ramsay gets his from  New York butcher Pat LaFrieda. 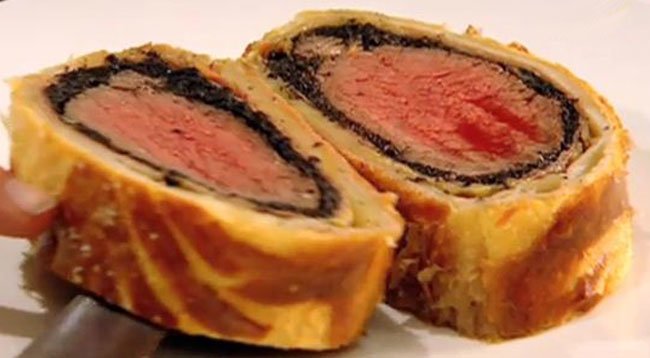 Plate up your Beef Wellington